UPDATED: A COVID Boost for Bicycling

A few weeks ago, in this blog, I wrote about the sense of freedom that bicycling evokes as one of the reasons why bicycling has grown in popularity since the COVID pandemic. But bicycling does not equate to freedom for everyone, as events in Los Angeles tragically brought home this week.

Dijon Kizee, a young Black man, was riding his bicycle when he was stopped by deputies of the Los Angeles County Sheriff’s Department for “violations of the vehicle code.” The events that ensued ended with Kizee dead of multiple gunshots in his back.

That an act as trivially illegal as bicycling against rather than with traffic—an act that I observe in my own community on a daily basis—can lead to death at the hands of law enforcement is unfathomable to me. But the events of this summer demonstrate that it is indeed all too possible for those whose skin is darker than mine.

The discriminatory policing of Black people on our streets, whether they are walking, bicycling, or driving, denies them the freedom of movement that we white people take for granted as our right. My colleagues Sarah McCullough and Jesus Barajas are doing important work in support of mobility justice. Please take a look at recent examples of Sarah’s work here, here, and here, and at Jesus’s website. Stay tuned for perspectives from them in this space in the future.

One small silver lining in the world of transportation amidst this tragic COVID pandemic is a resurgence in bicycling. News outlets are reporting booming sales of bicycles, with bike shops scrambling to keep up with demand. “They’re buying bikes like toilet paper,” one industry expert was quoted. My husband experienced this problem firsthand last week in Davis, California, when he decided he had to have a new mountain bike. The local shop still had some inventory, but they had 40 bikes to prepare for pick-up before they could get to his! Demand has not looked like this since the bike boom of the early 1970s.

The first form is recreational. Bicycling is a good source of exercise at a time when gyms are closed. Research shows that bicycling is good for mental health as well as physical health. It is also a good form of recreation–a socially distanced way to get out of the house. A recent paper of mine identifies the various aspects that people enjoy about bicycling, from the feeling of freedom, to a means of escape, to a sense of movement–all things which are perhaps more important in these times than ever before.

The second form is utilitarian. The earliest reports of an increase in bicycling came in the first days of the pandemic, when people were still traveling to work but were reluctant to use transit systems. New York saw a 52% increase in bicycle counts on bridges into Manhattan in early March compared to a year ago, and ridership has continued to grow. Persistent health concerns with traveling via transit systems coupled with significant cutbacks in transit service mean that bicycling will remain an important option as more of us return to work.

Better bicycling infrastructure would further encourage this welcome trend. As our studies as well as those done by other researchers have found, most bicyclists feel substantially more comfortable when they are protected from traffic through either a separate bike path or a buffered bike lane. And that’s another silver lining of this pandemic: Cities across the U.S. and throughout the world have been repurposing their street space to provide a safer and more appealing environment for bicyclists and pedestrians. Oakland, California, for one, announced in April that it would close 74 miles of streets to through traffic; actual closures total a much-lower-but-still-impressive 21 miles as of mid-July. 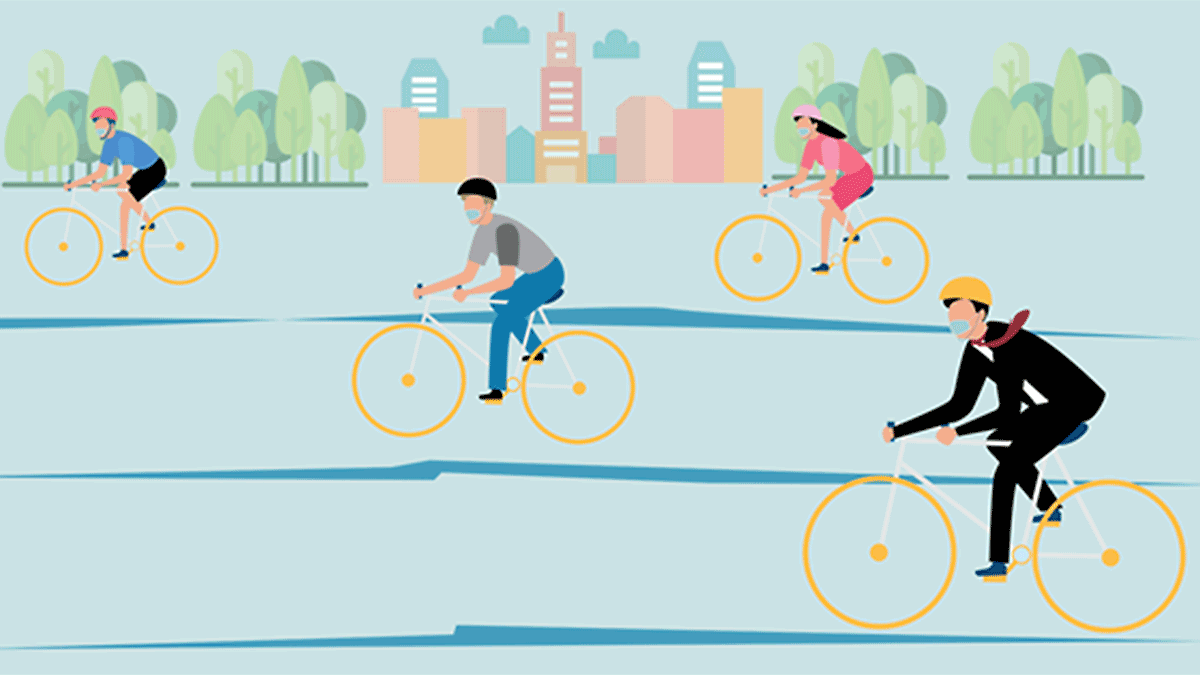 A sustained increase in utilitarian bicycling will require a sustained commitment to funding bicycle-friendly infrastructure. California’s State Bicycle and Pedestrian Plan, adopted in 2017, set an ambitious goal to double bicycling by 2020. To achieve this goal, the state allocates $110 million each year to the Active Transportation Program, which funds local bicycle and pedestrian projects. But this amount is dwarfed by state budget allocations of $5 billion per year for building highway projects, plus $2.2 billion for designing these projects, and an additional $2.1 billion for maintaining existing highways. Compare California’s commitment to Ireland’s recently announced commitment to spend 20% of its transportation budget on walking and bicycling. Just imagine what our cities could do with a doubling of funding for bicycle infrastructure.

Before the COVID-19 pandemic, the big new development in bicycling was bike-share systems, which have proliferated in cities around the world in the last decade and attracted people who would not otherwise have been bicycling. Our study in Sacramento shows that these systems can help normalize bicycling as a mode of transportation across the population. Although the pandemic and the industry retrenchment it triggered have hit some systems hard, many are now rebounding. Parisians, for example, are now using the city’s Velib system in record numbers. Portland is planning to triple its bike-share fleet in September. Supporting these bike-sharing systems–financially and/or institutionally–is another way that cities can promote bicycle use.

The resurgence of bicycling during the pandemic is just one example of how this flexible, self-propelled mode of transportation has the potential to contribute to the resiliency of our cities. Time and time again following natural disasters, bicycling and walking have remained viable when other modes of transportation have proved risky or unreliable. During the Camp Fire in Northern California in November 2018, for example, several residents of Paradise got on bicycles to bypass traffic jams to escape the flames, according to a UC Davis survey. Bicycles are also economically resilient, in that they cost a tiny fraction of what it takes to own and operate a car. A newly established “transportation library” in upstate New York will be loaning out bikes salvaged from defunct JUMP bike-share systems–for free! Programs like this can help to get bikes into the hands of those who can benefit from them the most.

The bicycle has sometimes been called “the world’s greatest invention.” In recent months, we have perhaps come to appreciate its value more than ever. Now is the perfect time to put in place the policies and programs that will enable us to take full advantage of its potential as an essential component of our transportation systems, past, present, and future.

Susan Handy is the Director of the National Center for Sustainable Transportation at UC Davis. Her research focuses on the relationships between transportation and land use, particularly the impact of land use on travel behavior, and on strategies for reducing automobile dependence.