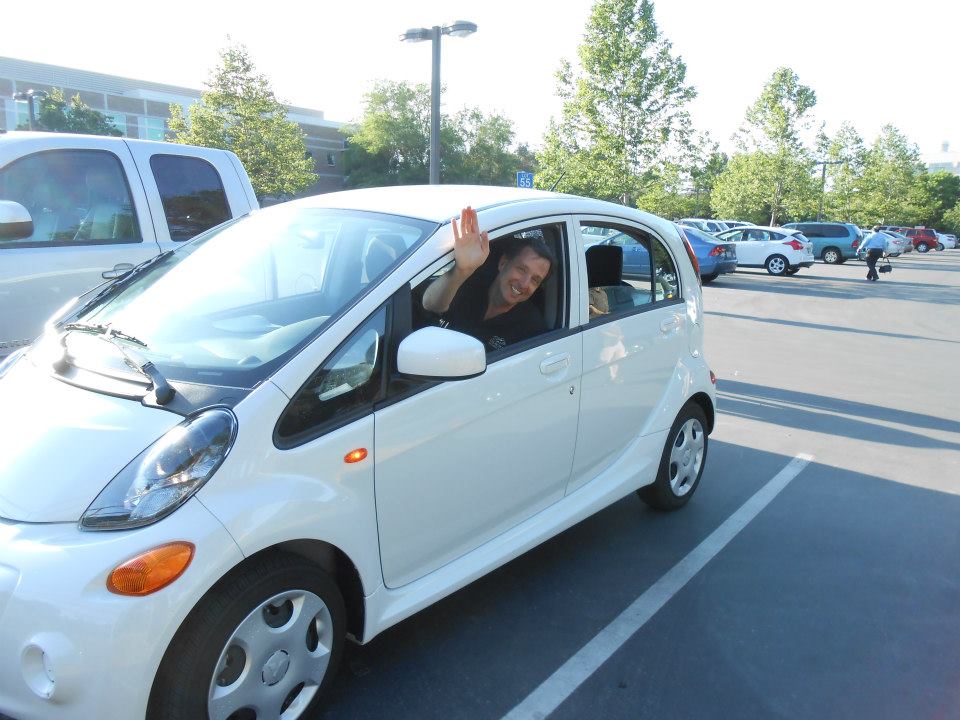 We had wanted to go electric since I served as General Counsel at CALSTART in the 1990’s. We got a hybrid Prius in 2008. and we had dinner with the first owner of a LEAF in Yolo County on the day it arrived, so I was following the developing market. We looked at several options, but needed a four-door car. I also wanted a car that looked distinctively electric. We drove a i-MiEV with the whole family at a City of Davis event in 2012. Ultimately, we chose the i-MiEV for its 4 doors and its distinctive look.

The initial higher cost ($32K) was offset by federal and state incentives, which brought the i-MiEV down to the price range of a Prius. Our gas costs went way down and initially I had free charging at work. For a while that free charging went away, but then my parking lot offered free 110V charging. I was disappointed in the first year when I started hearing the deals that some colleagues had gotten when the competition increased and prices decreased. I probably should have leased this first EV. The difficulty of getting it serviced (I had to travel a full day to get to Concord for service) increased indirect costs.

Our Prius became the vehicle we used for many uses, while the i-MiEV was primarily my commuter car. I also drive it to the airport, 20 miles away. When the charge would go 60 miles, it was fine. But as the battery has worn down and my range has decreased, I’ve had to be careful. I only go to the airport when I’m fully charged. I probably travel less mileage overall in my i-MiEV than I would in a conventional car.

A limited mileage range does not make use of an EV impossible. An EV satisfies many daily uses and a second car can be used for other purposes.

For a few years, the dealer where I bought the car (in Fairfield) had no EV technician, so I had to drive 55 miles to Concord for service. At first I could make it on one charge, although I still stopped in Fairfield just to be safe. Once this year it took me three charges (not full charges) to get back from Concord because it was raining and windy on the way. I made it to a UC Davis parking lot with a charger, and had to hang out in Shrem Museum while it charged, as I was not sure I could make the final four miles to my home. It was a bit nerve-racking.

When I put a photo of me in and out of my EV on Facebook, I had people around the world questioning how I could fit in that little car. Also, EVs have the same issues regular cars do. I was driving by Playfields park earlier this year and a home run of a men’s softball game destroyed my windshield. (But sometimes even regular problems can be more difficult with an EV. The windshield company had never heard of a i-MiEV, so they arrived without the necessary materials and had to reschedule the appointment.)

Have more chargers obviously available everywhere (e.g., signs on highways showing chargers at exits). The more people see chargers where they go (e.g., shopping centers), the more confidence they will have that an EV will work for them.