California’s ZEV Rule a Model, This Time for Korea, With Help From ITS-Davis Researchers

By Scott Hardman and Jiyoung Park 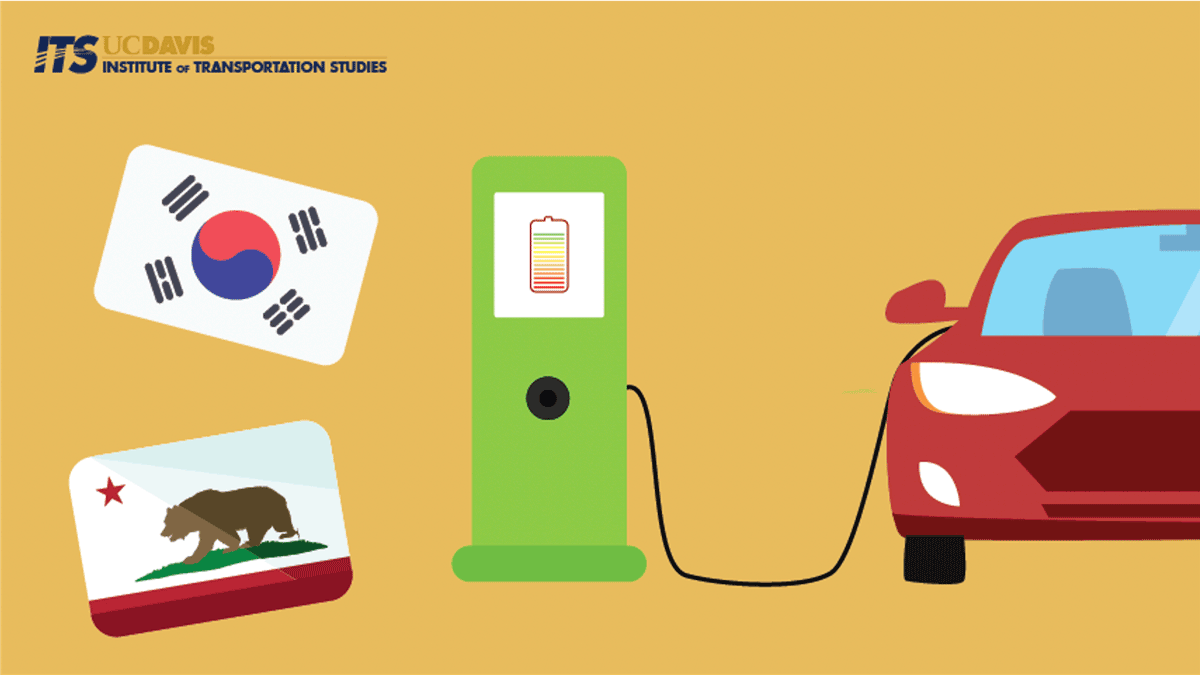 Here’s a major policy success of 2020 that probably slipped by most people in the United States: Korea, the sixth-largest producer of automobiles and home to the third-largest automotive group in the world (Hyundai-Kia), successfully implemented its own zero emissions vehicle (ZEV) sales regulation—with help from ITS-Davis researchers.

Korea’s ZEV rule is fashioned after California’s ZEV mandate, which is widely credited with the commercialization of ZEVs globally and is one reason California is the leading US state for electric vehicle sales. ITS-Davis researchers have contributed to the evolution of the ZEV regulation since the early 1990s by providing independent analysis of vehicle technologies; environmental and economic impact studies; and consumer behavior research to enhance market understanding.

In 2018, a team of researchers from the PH&EV Center—including Alan Jenn, Jae Hyun Lee and Scott Hardman—traveled to Seoul to meet with researchers from KOTI to exchange research findings. The ITS team learned that although Korea offered strong financial incentives for ZEVs and had ample charging infrastructure, vehicle supply was lacking. Most of the ZEVs produced in Korea were being exported to markets like Norway and the United States. Few were available domestically.

The Korean government, which until then had not adopted national EV policies, was shaken by severe air pollution episodes in 2018 and 2019 and widespread public demand for cleaner air and eco-friendly car policies. As a result, it appointed KOTI to research and design the Korean ZEV sales regulation.

KOTI tapped the collective expertise of ITS-Davis and the International EV Policy Council. ITS-Davis provided direct and indirect assistance in the drafting of Korea’s ZEV regulation. The EV Policy Council provided international policy expertise to inform Korea’s policy development process. It also facilitated a 2019 workshop in Davis attended by a Korean delegation and representatives from the California Air Resources Board (CARB). The ITS-Davis team and CARB experts provided feedback on a draft of the Korean regulation and suggested changes to increase its effectiveness in meeting its goals of ZEV sales and improved air quality. Their recommendations included increasing the ZEV sales target, adjusting the credit calculating system, and implementing a penalty system for non-compliance. Korean officials incorporated the recommended changes into their regulation and it continued through the regulatory process.

In large part due to the work of KOTI, Korea’s ZEV regulation was introduced and passed in April 2020 as the Clean Air Conservation Act Chapter 4 Article 58-2 “Deployment of low-emission Vehicles”. Korea’s ZEV credit target, like California’s, is 22% of vehicles sold in 2025. The regulations in Korea and California require automakers to annually accrue a minimum number of ZEV credits, which are awarded for each ZEV sold, based on vehicle characteristics such as range. Korea’s per-vehicle credit calculations mirror California’s, though credits are capped at 3 per vehicle rather than 4. (For background on how California’s and other jurisdictions’ ZEV policies work, see this International EV Policy Council brief.) Unlike California’s rule, Korea’s credit calculation accounts for vehicle efficiency in addition to ZEV range (see figure). Also unlike California’s rule, compliance with Korea’s ZEV rule is voluntary at present to allow automakers time to plan their compliance strategies. After 2023, penalties for non-compliance will be introduced.

The regulation does not yet set overly ambitious targets for ZEV sales. However, Korea now has a regulatory framework into which larger ZEV sales targets, including 100% ZEV sales, can be introduced. Furthermore, the regulation signals Korea’s desire to support a transition to ZEVs to improve urban air quality and reduce greenhouse gas emissions.

As more nations consider ways to transition to 100% electric vehicle sales, a ZEV requirement may provide a regulatory route for reaching these targets. A ZEV regulation can create certainty for automakers by providing a clear pathway of ZEV sales that ramps up from single digit percentages to 100% of the market. 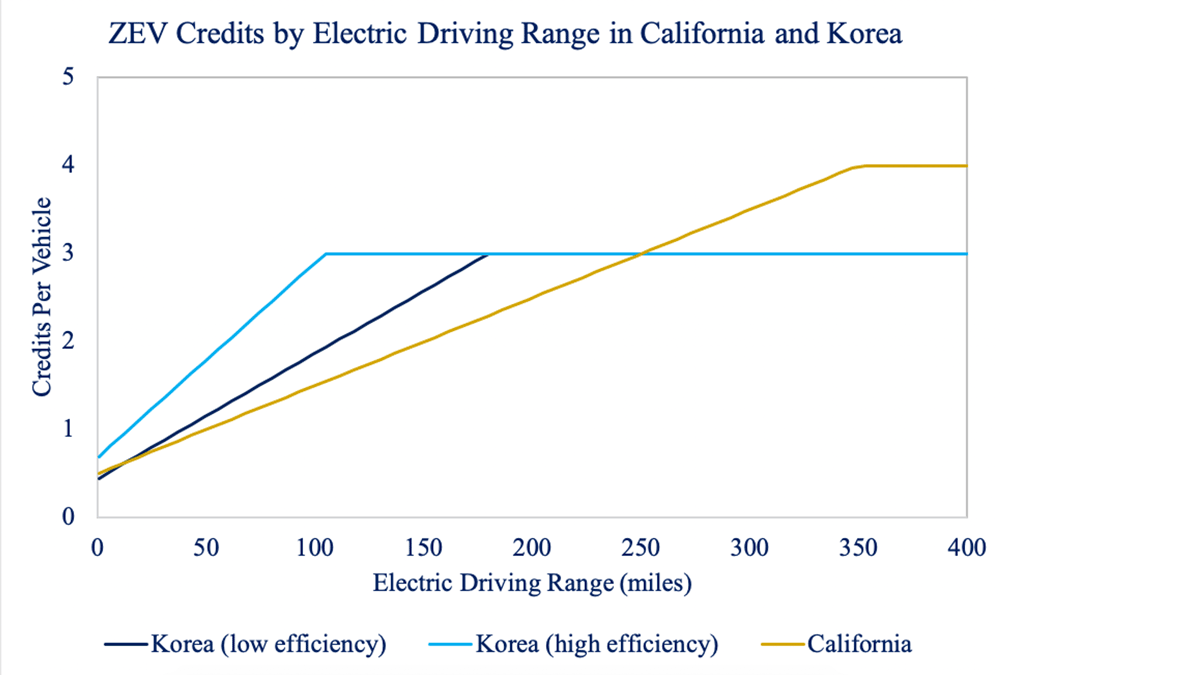 The authors acknowledge ClimateWorks Foundation and the Paul G. Allen Family Foundation for funding the work of the International EV Policy Council.

Scott Hardman, Ph.D. is a professional research scientist at the Institute of Transportation Studies, University of California, Davis and manages the International EV Policy Council

Jiyoung Park, Ph.D. is a senior researcher at The Korea Transport Institute (KOTI) and a member of the International EV Policy Council