Sometime last fall, we reached a global milestone: 1 million electric light-duty vehicles or LDVs (cars and SUVs) sold since 2011. This was an incredible achievement for a zero emission technology that had seen total sales of only a few thousand before that. And yet, it is a drop in the bucket—0.1% to be precise—when compared to the growing juggernaut of 1 billion+ LDVs on the world’s roads, the great majority of them gasoline-powered.

Policymakers and others are counting on electric vehicles to revolutionize driving around the globe and, in the process, dramatically cut CO2 emissions as well as urban air pollution. This is certainly possible, but an important question remains: How long will such a transition take? Apart from questions about the pace of electric grid decarbonization (which electric vehicles will depend on to ensure they truly are low emitting on a life-cycle basis), sales of electric vehicles must dramatically increase over many years to change the nature of our planet’s personal vehicle travel.

As I reported in a Greenlight Blog at the Paris COP 21 in December 2015, a range of groups jointly published the Paris declaration on e-mobility. It calls upon automakers, policymakers and all of us to reach a formidable global target by 2030: 400 million plug-in electric vehicles (PEVs) on the road, of which 100 million or more should be LDVs. (There are already well over 100 million electric two-wheelers in China, giving the 400 million target a head start). The 100 million target for cars and SUVs represents a 100-fold increase over the number of LDVs on the world’s roads today, and probably means annual PEV sales on the order of 30 million per year by 2030 (assuming rapidly rising sales year-on-year through 2030).

Our new research study, co-published with the Global Fuel Economy Initaitive, investigates some of the aspects and challenges of achieving a 100 million PEV stock target, i.e. reaching a 30-million annual sales goal, over the next 14 years. The paper explores recent trends in the market penetration of PEVs in selected countries around the world, and what kinds of growth we will need to see in different markets to have a chance to hit this target.

At first glance, the target seems daunting: today there are about 90 million total LDV sales per year around the world; 30 million represents one-third of this number. However, sales are expected to grow to perhaps 130 million per year by 2030, so it would represent a little less than a quarter of the world’s sales in that year. Another issue is that nearly all electric vehicle sales to date have occurred in four major markets: the United States, European Union, China and Japan. Together these markets account for only about two-thirds of global sales, and their share will shrink as growth accelerates in places like India, Southeast Asia, Latin America and Africa. It will be important to sell electric cars in all markets around the world to have a chance to hit the target.

The good news is that PEV sales growth in the biggest car markets has been robust. As shown in the figure below, sales of both battery electric vehicles (BEVs) and plug-in hybrid electric vehicles (PHEVs)—together comprising PEVs—have grown steadily in the world’s top eight markets: China, France, Germany, Japan, Netherlands, Norway, the UK and the United States, with a combined 76% increase in sales in 2015 compared to 2014. This is good, because to achieve 30 million in these countries by 2030 the average growth will have to remain close to 35% per year, which will become increasingly challenging as the base number grows. 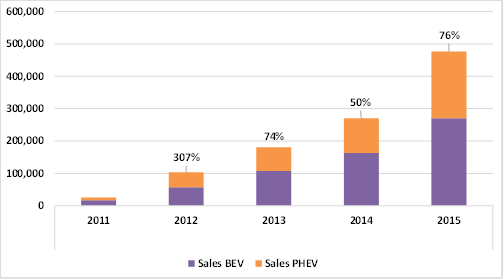 The study explores the recent sales trends in some detail, and attempts to trace the dynamics of the numbers and types of PEVs offered for sale and how well they are selling, as a guide to what may happen in the future. For example, although we already have more than 100 different models of PEV for sales across these markets, the vast majority represent very few units sold, and this may in many cases be intentional on the part of car companies: They are introducing radical new technologies and new design features, and using limited production runs to test their ideas. There were only about 15 PEV models for sale in 2015 that sold more than 10,000 units. Most of these were offered in multiple countries.

The study makes the point that to hit 30 million in sales we will need something like 300 models each selling 100,000 units to do it, a challenging prospect. Given that models are generally replaced only after about six to eight years of sales, the rate of conversion to very different drivetrain systems (plug-in electric drive vehicles) will have to be quite high over the coming years as new models are introduced. This will require large investments and market confidence on the part of manufacturers, not likely to happen if unit sales are mostly below 10,000 per model and new vehicles are regularly emerging into an increasingly crowded market.

The good news is that unit sales have been rising, at least for the top 20 selling models. And as the study points out, there appear to be major market segments that are not yet well represented with PEVs, such as some of the larger and premium segments. This is ironic because PEVs may sell quite well in these segments, given the demand for innovative technologies and relative price insensitivity of buyers in these segments. On the other hand, PEVs have had trouble competing in the economy-car segments of markets, where consumers tend to be very price-sensitive, and that is where most of the models have been introduced. Even with strong price incentive systems in many countries, the prices of PEVs in small- and medium-size segments may not have reached competitive levels, as we show in a U.S. case study.

The study provides a range of insights into how markets are evolving, but it admittedly only scratches the surface of a complex and rapidly evolving situation. Having detailed 2015 data is useful, since this was a year with a veritable explosion of new models and increasing sales. But it is hard to tell how this will translate into ongoing and future sales.

The study is part one of what will be a two-part series. We are now working on modeling how markets around the world might evolve into the future, and how they must evolve to hit a 100-million target. It will require convincing manufacturers to produce large numbers of PEVs, and to persuade consumers to buy them. And the key to unlocking and motivating both will be policy. Countries have put many policies in place already, but it is not clear if these will be enough, or whether they can be scaled back, as is being widely proposed, any time soon—and still reach ambitious PEV targets.

This second paper is now in development, with a target publication date of early 2017. It will provide a roadmap of both the sales and the policies needed to achieve substantial PEV growth around the world over the coming decade and beyond.