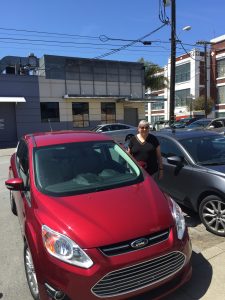 I have always been interested in energy conservation. We had had solar panels installed on our roof and it was clear that at the end of the year, we would come out significantly ahead. PG&E does not reimburse you for the extra energy you send to the grid, so we had extra electricity to support electric vehicle (EV) charging at home.  As it was time for me to get a new car, we decided to investigate plug in hybrids.

We were pleasantly surprised at the purchase price. In addition, at the time of our purchase there were sizable federal and state tax rebates. With the solar panels, driving around town is virtually free.

Trying to keep the smug look off my face. I love my car!

What are the biggest misconceptions of electric?

People do not understand how an electric hybrid works. It’s easy to confuse a plug-in hybrid like my car with a hybrid like a Prius. Both are powered by a combination of an electric battery and a gas-powered engine. But a plug-in hybrid can be connected directly to an external power source to charge the battery (so you can take short trips without using gas at all) while the battery of a non-plug-in hybrid only charges through regenerative breaking or while running off of the gas engine.

My dog and I regularly drive to Salt Lake City and back (approximately every 2–3 months). I love to drive and I like that drive in particular. It is a distance of 660 miles and I only need to fill my car up once en route.

There should definitely be sizable tax rebates from both the federal and state governments for not only vehicles with an electric component but also for solar panels that can support them.