By Fraser Shilling and Seth Karten 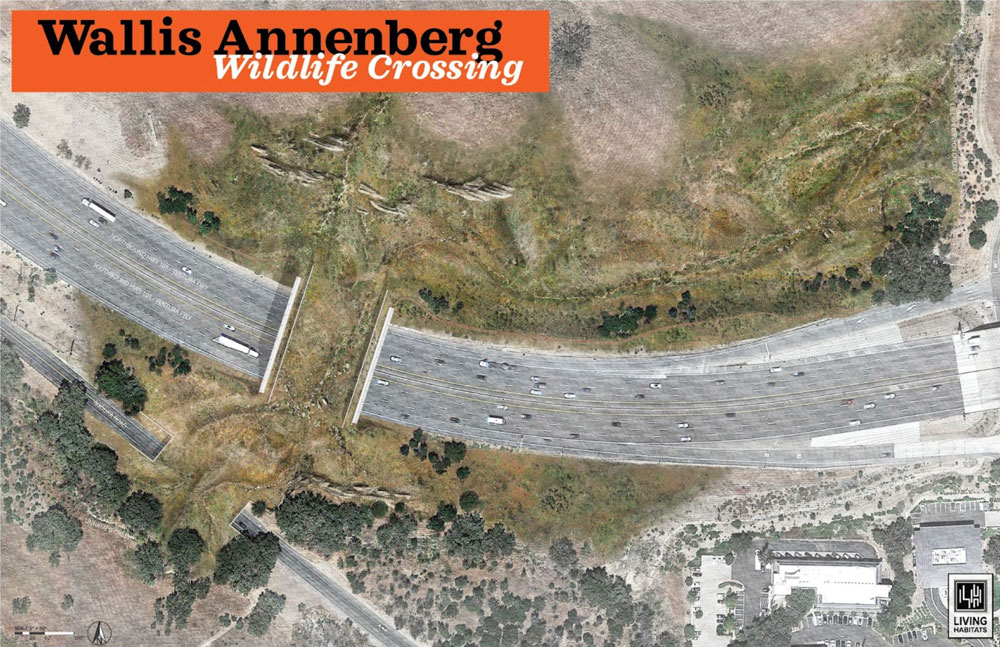 The Wallis Annenberg Wildlife Crossing in Agoura Hills, California, which will soon be under construction, is unprecedented in its size, cost, and primary purpose. Estimated to cost $90 million, it is the first major wildlife over-crossing primarily aimed at bringing genetic diversity to isolated animal populations rather than preventing roadkills—though it will do that, too.

The crossing, also known as the Liberty Canyon Wildlife Crossing, will be an overpass covered with vegetation, spanning ten very busy lanes of US Highway 101. It will allow mountain lions and other species to cross between the Simi Hills to the north and the Santa Monica Mountains to the south. Without this crossing, the mountain lion populations in the area would likely disappear in the next few decades because of inbreeding, vehicle strikes, and limited space to escape from wildfires.

The planned crossing features design elements that will encourage mountain lions and other species that are sensitive to light and noise to actually use it. Barriers and berms will be built to reduce the amount of traffic-generated noise and light that reaches the areas that animals will use to approach the crossing. Three of our research projects at the Road Ecology Center on roadway light and noise helped influence this design. These projects were supported through state (SB1) and federal (USDOT) funds to the UC Davis Institute of Transportation Studies and the National Center for Sustainable Transportation, respectively.

In the first of our related projects, we found that wildlife crossings are used by larger proportions of nearby, light- and noise-sensitive animal species if the crossings are comparatively dark and quiet. Our second study showed that the different behaviors among animal species in response to traffic noise and light determined how much they used wildlife crossings with varying traffic disturbance conditions. In the third study, we investigated ways of mitigating light and noise near the Wallis Annenberg crossing and a proposed over-crossing for I-15, near Temecula, California. First we found that light and noise from traffic could be detected more than 100 meters away from the highway in the animal approach zones of both crossings. We then used 3D-design software and traffic-noise modelling software to show that changing the configuration of barriers and berms near the crossings could reduce the traffic noise and light in the approach zones (Figure). Based on the results, we made recommendations to the designers to increase the chance that wildlife will approach the crossings.

Figure: Noise and glare mitigation in the approach zone to the crossing. (A) Typical approach to crossing structure without noise and light abatement. (B) Quiet and dark paths created by excavating and redistributing landscape materials (tan areas) and adding barriers along the highway.

The Need for Fencing and Crossings

Every year, more than 7,000 vehicle collisions with large, wild animals (e.g., deer, black bear) are reported in California, according to our California Roadkill Observation System (https://wildlifecrossing.net/California), and this is likely a significant undercount. For example, State Farm Insurance Co. estimates that there are upwards of 20,000 claims/year for deer-vehicle collisions in California. Not only can these crashes lead to loss of human life, property, and animal life, they can also affect the balance of ecosystems.

One way to slow the decline of wildlife species is by lowering direct and indirect mortality from traffic. We know that we can reduce the number of vehicle collisions and alleviate genetic isolation with simple tools: 1) traffic calming and reduction, 2) fencing alone, and 3) fencing combined with wildlife crossing structures. Research done in California by the Road Ecology Center has shown where wildlife crossings and fencing are most needed and could provide greater economic benefits than their cost (https://wildlifecrossingcalculator.org). The state is already home to more than 100 wildlife crossings, used by a wide range of reptile, amphibian, and mammal species. But there is a grave need for at least ten times as many.

In the past few years, public support for wildlife crossings has grown significantly. Knowledge and awareness of crossings has spread from research scientists, to transportation planners and engineers, to the wider world. But policies and related budgets remain inadequate to the needs. Two Legislative efforts reflect this picture.

First, the 2021 Federal Bipartisan Infrastructure Law initially authorized $350 million for new wildlife crossings. Ultimately, however, Congress appropriated $0 of the $350 million for crossings. Second, California Assembly Bill (AB) 2344 initially required the Department of Fish and Wildlife and Caltrans (the California Department of Transportation) to investigate areas that are essential to wildlife movement and habitat connectivity, to develop a plan to address these areas, and for Caltrans to implement 10 crossing structures per year. This last and strongest requirement was supported by hunting and environmental groups, but was recently removed from the bill. Although compromise of environmental legislation is an all-too-common occurrence in California, the future will tell whether this critical requirement will be negotiated back into the bill.

In California, Road Ecology Center research shows that wildlife-vehicle collisions cost the state upwards of $250 million per year. While the state’s transportation budget is $20-25 billion per year, Caltrans has claimed that only two to three wildlife crossings are built per year in California, which, at most, would account for about 0.1% of the annual transportation budget. Yet, surveyed taxpayers consistently report that they would be willing to pay more taxes in order to protect wildlife. And state policy may finally be starting to reflect this outlook. SB 790, signed by Governor Newsom in October 2021, included $61 million for building wildlife crossings, $7 million of which was allocated for the Wallis Annenberg crossing.

In sum, we know where to build wildlife crossings and fences; research is improving the effectiveness of these tools; and we can approximate their cost and benefits. We have a lot of information for decision support on how to address habitat fragmentation, wildlife deaths, vehicle accidents, and the cost to humans and nonhuman animals. While the policy and transportation planning response has grown significantly, we still need more from implementing transportation agencies to protect wildlife and from legislative bodies to require action and allocate more funding to make it possible.

Fraser Shilling is the director of the Road Ecology Center at the UC Davis Institute of Transportation Studies (ITS-Davis); Seth Karten is a senior writer at ITS-Davis.