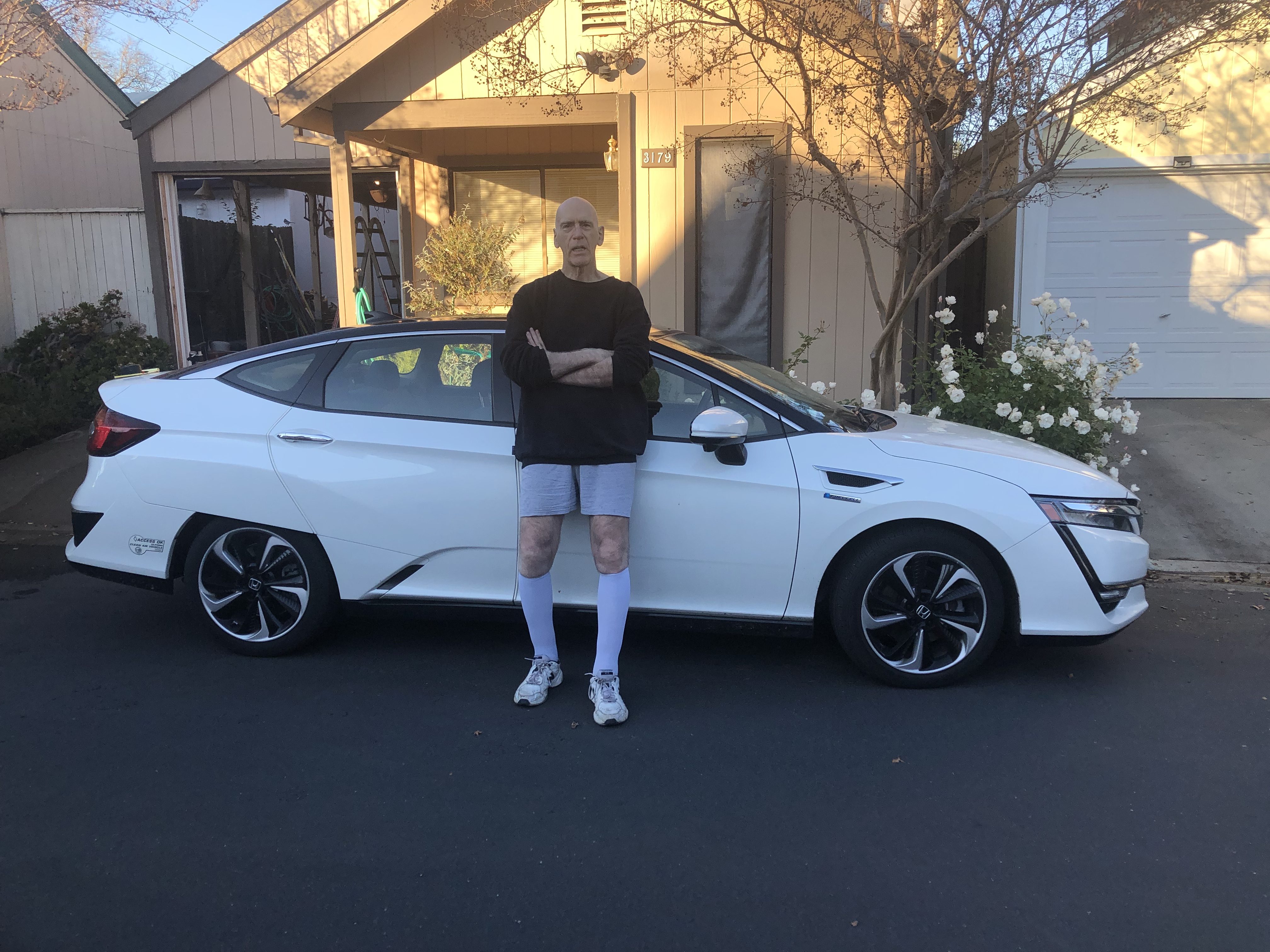 I was retiring in 2016 and I knew that my (well-used) 1992 Honda Accord should also be retired. For my first-ever new car, I wanted a non-petroleum or reduced-petroleum vehicle. But fully electric cars with adequate range and performance (i.e., the two Tesla models available at the time) were very expensive. While I was considering my options, my Accord was seriously damaged in a hit-and-run accident, so I had to get another car in early 2017.

I initially intended to purchase a plug-in hybrid, and I favored the reliability, handling, performance, and features of the Honda Accord. But in 2017 Honda was offering only the plug-in hybrid option for its Clarity line, not for the Accord. So I turned my attention to the Clarity plug-in hybrid. But when I went to early Clarity promotional events in Sacramento put on by Honda, I was particularly impressed with the fuel-cell model of the Clarity. I also liked the idea of being an early “pioneer” with a fuel-cell electric vehicle. Finally, I figured that if things didn’t pan out, it was only a three-year (lease) commitment. As it happened, the Clarity—with its range, performance, zero-vehicle-emissions, and features—has proven to be a good fit for me at this stage in my life.

The Clarity is a leased car. Honda has offered generous financial incentives (e.g., moderate monthly payments and free fuel!) during the three-year lease contract for its fuel-cell vehicle. Plus I received a large rebate ($5,000) from the state and got stickers that allow me to use high-occupancy vehicle (HOV) freeway lanes. So I feel that leasing the Clarity, under Honda’s promotional program, was a good financial decision. So far the car has not required any unusual maintenance, and I hear that Honda has worked to ensure that yearly maintenance costs will be more consistent among dealers.

The electric motor powering the Clarity seems excellent. It provides good acceleration and so far is performing reliably. Other features (like air conditioning, heating, and power accessories) all work very well. The one big challenge has been that until recently there was just one hydrogen fueling station in the Sacramento metropolitan area (in West Sacramento).  Fortunately, one of two additional stations planned in the region has recently gone online and a third should be up and running sometime in 2019.

When people think electric, they tend to think of either expensive, flashy Teslas or of under-powered, “golf cart”-like vehicles with poor performance and inadequate operational range. The Clarity is neither of those things. And besides the Clarity, there are plenty of new types of electric cars either here now or coming soon from other manufacturers that are or will be (a) affordable and (b) adequate for daily drivers.

The Clarity is limited to locations within an adequate distance from hydrogen fueling stations, which are currently in the high population density areas of southern and northern California. The longest trip I have taken so far is to Palo Alto and back.

People seem impressed by the Clarity! I personally like the cabin roominess and semi-luxurious features like heated, power-reclining leather seats and the excellent GPS map display.

What is the number-one thing you think could be done to encourage more people to go hybrid/electric?

Plug-in electric vehicle (PEV) and fuel-cell vehicle (FCV) manufacturers appear to be in competition. I believe there is room for both—indeed, that they should work together instead of in opposition. Most PEVs have to improve operational range, which they could do through fuel-cell technology. Meanwhile, more hydrogen fueling stations are needed if manufacturers are to convince consumers that FCVs are good buys. FCV manufacturers could partner with PEV manufacturers to construct joint fueling stations that can serve both types of vehicles. Also, local government agencies need to address regulatory hurdles that are delaying hydrogen fueling stations. We’ll see within the next 10–20 years whether these obstacles gets addressed and whether PEVs, FCVs, or some new type of car comes to dominate the market.