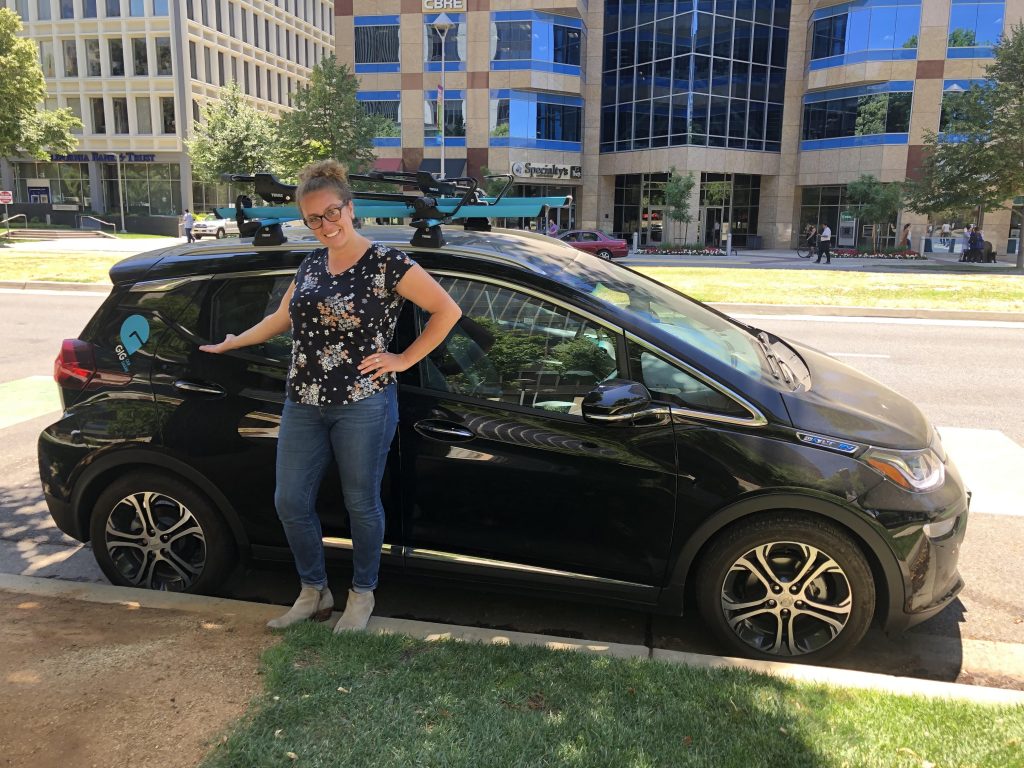 Gig car model you use: Chevrolet Bolts in Sacramento, Prius for trips between Bay Area and Sacramento
Where you use Gig (Bay Area/Sac): Both!
When you started using Gig: April 2019

Gig Car Share is a new service that provides access to all-electric vehicles in Sacramento and hybrid vehicles throughout the Bay Area. Gig allows users to choose the duration of their drive and provides the flexibility to pick up and drop off their cars in different locations. Users are able to park in a wide range of spots within the service territory, and can pay by the mile, hour, or day—whichever rate is lowest. More than 200 Gig cars are available in Sacramento, representing the nation’s largest all-electric car fleet.

What kinds of trips do you use Gig for (work, adventure, errands, etc.)?
I’ve used Gig to meet up with friends after work and to commute between the Bay Area and Sacramento.

What made you decide to go start using Gig?
The ease of being able to pick up the car and park it anywhere (abiding by parking rules, of course!). The cost of renting the vehicle, insurance, and parking is also reasonable.

How has the cost of using Gig compared to the cost of purchasing and owning a conventional/EV car?
I unfortunately still own my car and am too dependent on it for longer trips (both in time and distance). Gig is a bit limiting because there are specific zones in which the car must be picked up and dropped off. The driving factor (pun intended) for me is the simplicity of using Gig and knowing that my ride is zero emissions (if it’s a Chev Bolt).

What are the biggest misconceptions of Gig/carsharing?
One of the most common misconceptions I hear is that Gig is not environmentally friendly. Some criticize Gig for still requiring the use of single-occupancy vehicles and think that they require fossil fuels. However, the Chevy Bolts that are seen cruising around Sacramento are entirely electric and have no tailpipe emissions! While Gig still allows people to continue riding and driving in individual cars (rather than transit), I think it provides an opportunity for a behavior switch. People that may not have thought about leasing or purchasing an electric vehicle may become more likely after testing one out using Gig. Gigs are fun to drive and have an impressive range of about 250 miles!

Describe one of the farthest/coolest/most ambitious trips you’ve ever taken using Gig.
I haven’t had an opportunity to do many fun or ambitious trips yet, but I have driven a Gig about half a dozen times from San Francisco to Sacramento.

Do you have any good stories about your experience as a Gig user?
All of my experiences with Gig have been positive so far! The biggest win for me was discovering that the Prius Gigs can be used for one-way trips between zones (e.g., Bay Area and Sacramento) for about the same price as a one-way Amtrak ticket – but in about half the amount of time!

What is the number-one thing you think could be done to encourage more people to use Gig/carsharing services?
Spread the word! Many people see the cars around and haven’t bothered to look into what Gig is. There’s a great incentive to share your referral code with friends (you each get $25)! Also, the zones for Gig and carsharing services generally need to be more strategically placed in disadvantaged communities and areas where transit and other shared modes of transportation (like bike and scooter share) are limited.