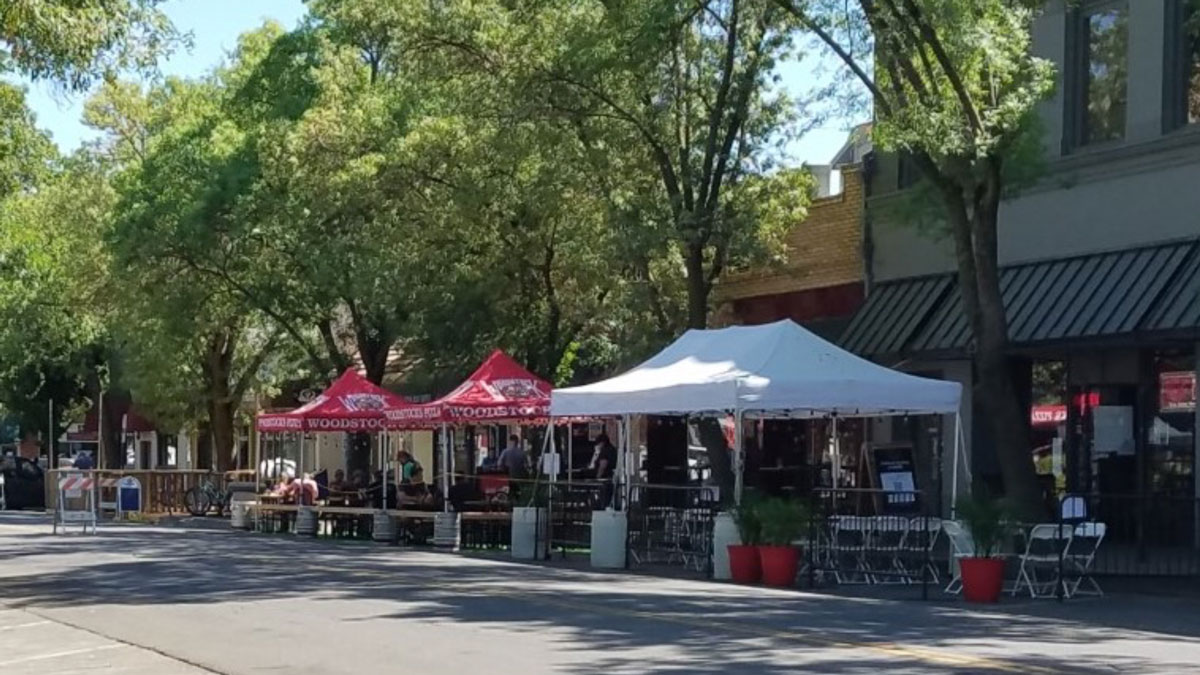 In most cities in the United States, streets are for cars, not for people, but that may be changing. In California, Sacramento’s R Street restaurant strip is open for business, but closed to vehicle traffic to allow for more room to breathe for outdoor diners. In the city of Davis, shade tents are popping up throughout the downtown area on weekends, to make outdoor dining more comfortable in the summer sun. This is a part of an international trend, as evidenced by the list of more than 50 U.S. cities with street closures on the Covid Mobility Works website and in the open catalogue of street changes inspired by the pandemic. These street closures, also called “slow streets” or (our preferred term) “open streets,” reflect a worldwide movement to reclaim city streets from cars for people to sit, dine, or travel on foot and bicycle. It is unclear whether these open streets experiments are a passing fad or whether they offer a window into the urbanist dream of a future without cars.

These changes are new and growing organically, so it takes some work to understand the total scope so far. As more data is assembled we can piece together whether open streets benefit (or challenge) community resilience.

In some ways, these open streets emulate the short-term repurposing of roadways common for marathons, musical events, art walks, and, ironically, even for car shows. But the pandemic-induced open streets movement has energized supporters of more permanent car-free areas while also stoking resentment from critics who point to a lack of community engagement in the decision-making process. This hurried strategy is unsurprising, given the circumstances, but if the streets stay open, efforts to ensure community buy-in will mean more successful progress towards an urban space that serves everyone.

Open streets can be found in major cities around the world. They are a permanent fixture in Paris’ downtown pedestrian-only district. Bogatá opens streets every Sunday for Ciclovia, which is a community celebration of biking. Seattle has made their street closures permanent, and other cities, like New York City, are considering following. More permanent open streets can be an opportunity for community building. While encouraging biking and walking in downtown areas, they can also affect attitudes on car reliance. Research from our UC Davis colleague Susan Handy shows that reducing car dependence can save money, save time spent in traffic, reduce emissions, and increase health-promoting activities like walking and biking.

However, as with many efforts at reducing car traffic, there have been moments of trial and error in the pandemic-related open streets efforts. The Untokening Project questioned whether city planners considered the experiences of Black, Indigenous, and People of Color (BIPOC), people with disabilities, and the unhoused in developing open streets. Some community members called into question who can capture the benefits of open streets. New York City was criticized for its police presence, ostensibly to enforce social distancing rules, when they opened streets to pedestrians and bikes. This reportedly made many people of color feel like they couldn’t appreciate the open streets, given the long history of racially biased harassment from police in that city. Closures that were not well planned have reportedly also cut-off routes for essential workers, who tend to be disproportionately low-income, while providing more space for wealthy people who can work from home.

Additional concerns have been raised that pandemic street closures were offering an opportunity to expedite planners’ wish lists, without engaging with residents to get buy-in. Changes to streetscapes should be led by residents and business owners working with planners, but this community empowerment-model of planning is difficult to accomplish during a pandemic. We remain optimistic, as many permanent positive changes have begun with a temporary change–putting up cones to test out a pedestrian only zone, for example.

Yet as the lockdowns linger, cities may need to work harder to reach community members. They might consider building in clear sunset periods for these experiments. These sunsets can always be revisited if the changes work for the full community of residents and users. Aaron Paley is president and co-founder of Community Arts Resources (CARS), a group that canvasses neighborhoods and talks with each business owner before closing streets for the annual CicLAvia in Los Angeles, which he founded. Paley emphasized the need for choosing sites where there are businesses that can benefit from open streets, such as small shops and restaurants.

Community engagement is essential for ensuring that open streets are inclusive, and that they avoid being created by and for predominantly white and wealthy people. Cities should also evaluate the results of these projects and ensure that they are delivering solutions that community members want. This could include engaging community members on each block opened and assessing how it is working across various groups. Cities will also need to better identify criteria for deciding if streets should be returned to car use, and when this transition should occur. This process needs to be clearly communicated to people on the closed streets and to the broader public.

Current social-distancing efforts allow for the possibility to experiment with how we use our public spaces. Car-free streets offer exciting opportunities for fun, safe, and efficient reuse of our public right-of-ways, but cities need to avoid repeating the same mistakes of the past and ensure these spaces are truly for everyone.

Kelly Fleming is Energy and Transportation Policy Analyst at the Policy Institute for Energy, Environment, and the Economy at UC Davis

Austin Brown is Executive Director of the Policy Institute for Energy, Environment, and the Economy at UC Davis