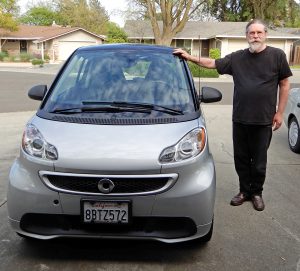 I wanted something that was affordable and available right away.
The small size of this car is a bonus. I used to ride a motorcycle,
so it seems huge compared to that.

The purchase price was less than I paid for a small, used, gasoline car
over 15 years ago. Operating costs are about the same for both cars.
I am paying a couple of thousand dollars to replace equipment that
was apparently looted from the car while it was between owners.

Different types of chargers charge at different speeds. Some chargers are twice as fast as others. Finding where charging stations are takes time to search online, though the app Plugshare is very helpful. And even once you know where chargers are, planning a route around them takes time. Gas stations do not have chargers for electric cars, so you often have to go to less-convenient locations to charge. If you’re taking a round trip that can be made without recharging, then driving an electric car is  just like driving a gasoline powered car. But if even a small amount of recharging is needed, it can add an hour or two—or more—to the the middle of the trip.

I don’t really know what other people think. If you are only going to have one car, then I think it should be gas-powered or a hybrid. Fully electric cars just can’t do everything that you expect a car to do right now.

I bought my fully electric car from a dealer that was almost 80 miles from my home, while the range of the car is about 60 miles. I did not realize that driving at 80 mph reduces the range by almost half, so I ran into trouble. I used the Plugshare app on my phone to find charging stations along the way. (At one place where I charged, there was a restroom, but it was locked, making the waiting time seem much longer!)

As a result, the trip that should have taken an hour and a half ended up taking about 12 hours. I tried to call AAA a couple of times to have them come and tow me the rest of the way home, but the wait time was so long that I gave up on them. Turned out that was a good thing, though, because you have to have a special towing hook (that’s usually stowed under the floor mat on the passenger side) to tow a Smart Car. I found out later that the hook that should have come with my car had been removed before I bought the car used

When you floor it, there is no extra sound or drama, you just go fast. That’s fun. When you drive it, there is no pollution from the exhaust. You realize that the noise and vibration of a gasoline engine is annoying. You don’t have to deal with gasoline fill ups, or oil changes. Not really stories, but good experiences!

There need to be more charging stations, and amenities that would make waiting at charging stations a more pleasant experience. Engineers also need to design new batteries that can charge faster.