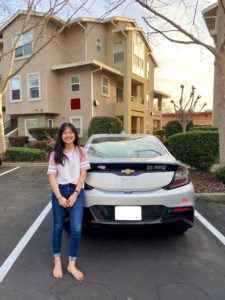 Shine and her Chevy Volt! (Photo courtesy of Shine Nah)

I wanted to save money on gas because I’m from Southern California and knew I would be frequently driving back and forth from home to Davis. Because I do not work, I wanted to save as much money as I can.

Personally, it is very beneficial for me to drive an EV because I can easily drive my friends around when we go places further away. I am more willing to drive because I don’t have to constantly worry about the price of gas.

I’m also a UC Davis student, so I can charge at the charging stations on campus. Rather than paying per hour for a charge, I only pay the cost of the parking permit plus an additional $10 a month. While the parking permit is expensive, I live further from campus so I drive to school and it mostly covers the price of charging my car, so it balances out.

The biggest challenge is finding places to charge when I’m away from home. And for some stations, you have to make a new account to charge your car rather than just paying by the hour, which can be a hassle when I am charging my car in places I don’t frequent.

I think the biggest misconception is that electric cars are not fast—that they don’t perform as well as regular cars. However, there are quite a few electric sports cars that can go very fast. Porsche makes an EV that can go from 0 to 60 in 2.6 seconds and has a top speed of more than 150 mph.

It has only been half a year since my Volt was passed down to me, so I haven’t been able to go on many trips. However, I have driven from Southern California to Davis numerous times. Although I’m not going anywhere new, the feeling of road tripping in an EV is still very exciting! I also spend significantly less on fuel, which makes the drive even better.

Increasing the amount of charging stations and making them simpler to use, instead of having to have an account to pay, would probably encourage more people to go electric. Personally, I think it is a bit expensive (per hour) to charge electric cars, compared to the range you get from hourly charging. If it was even cheaper to go electric and/or if the ranges of EVs increase, more people will make the change.