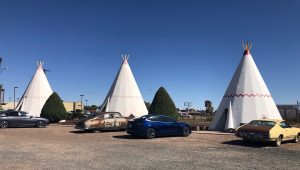 I decided to go electric to help our climate by reducing emissions from my driving, and to reduce our country’s reliance on foreign energy. I chose a Model 3 because it’s a fully electric car that is supported by a well-established rapid charging network.

The initial cost to purchase an EV was a bit higher, but the operating cost is much, much cheaper.

I love the cars, so the biggest challenge initially was trying not to drive all day just for the fun of it. Besides that, I’ve had no challenges!

That an EV won’t get you where you need to go, takes too long to charge, and makes just as much, or even more, pollution than a typical gas powered car.

In October 2019, I went to Albuquerque for five days of work. Albuquerque is about 1,200 miles away as the crow flies but instead of flying, I drove there in our Model 3. I kept driving data to share with those interested in learning about driving electric cars on longer trips. The full trip was 2,721 miles through six states. I drove a total of 47 hours, made 17 Supercharger stops, and used just over seven hours of Supercharging (for which I paid $92.66). I drove an average of 150 miles between Superchargers and charged for an average of 23 minutes per stop. The Supercharger network is extensive, very easy to use, and provided all the energy I needed for the trip.

In addition to stopping at Superchargers, I made stops along the way at the Grand Canyon, Meteor Crater, Monument Valley, and more. Watching the sunrise in Monument Valley was probably the most memorable part of this road trip, but there were many other highlights. Driving electric through the American Southwest was a treat. I’ve posted my own blog that covers the trip in more detail, including how much energy was used to power the trip, and the emissions produced by driving electric compared to driving a gas-powered car. Do you have any good stories about your experience as an EV owner?

Yes, lots! They are featured in my blog, “Its Electric”, where I provide information and fun anecdotes for those thinking about getting an EV.

Getting people behind the wheel so they can test-drive an EV—any EV.