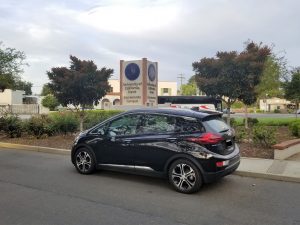 I needed a new car back in 2013. As I was researching options, I knew I wanted certain things. Reliability, fuel efficiency, and low maintenance were important to me. I was attracted to the benefits of using electricity as an alternative to gas and the possibility of less regular maintenance. I read everything I could about EVs and what it would mean to drive an EV as my only vehicle. I then did a lot of personal research into my driving habits and needs, to see if I could live with so-called “limited range.” I drove my usual routes and stopped to take a look at the public charging stations that I would need to use if I went electric. I collected a month’s worth of data on my driving habits and realized that an EV could work well for me. So I got a Nissan Leaf. Driving my Leaf for more than three years, I learned a lot about what goes into driving electric. Unfortunately, expansion of public charging locations was not keeping pace with the number of new EV drivers using them. The wait times at charging stations were getting longer and longer. That’s when I decided I needed to consider a longer-range EV. As luck would have it a few months later the Chevrolet Bolt became available. I researched pricing and real world performance for another 11 months before finally making the switch. The added range allowed me to almost completely eliminate my need for public charging! The practical hatchback design appealed to me since the Bolt is my only vehicle and the performance was excellent during my test drive. The safety features were good and crash testing performance was great. Also, it fits nicely in my garage with plenty of room to spare.

Although my EV had a higher upfront purchase price, federal and state incentives made it affordable. The cost of charging has been lower than what I would have been spending on gas and the time and “stress” savings of not having to ever go to a gas station are much appreciated. No oil changes means I don’t need to pay for the service or supplies. The recommended maintenance is low and infrequent. However, purchasing new tires at the moment would be much more expensive as normal cheap tires don’t seem to be an option without sacrificing some range performance. The lack of a spare tire also means I will have to call a tow truck if I get a bad flat that cannot be repaired by sealants, but Chevy includes five years of roadside assistance with purchase of a Bolt. There were also some upfront expenses to set up a charger at my home, but this isn’t necessary if you don’t need faster charging and can do with charging on a 110-volt outlet. Overall, my estimated long-term cost will be a bit less than if I had purchased a conventional vehicle.

The higher upfront cost of the vehicle was a problem, since it is hard to make the switch when conventional vehicles can be purchased for less. Other than that I haven’t really had any other issues. Frequent charging on longer trips may be an issue for many people, but I’m fine with it as it allows me to avoid fatigue and get some exercise or run errands while charging.

People often ask if I can drive at freeway speeds or far enough to leave town. I think that a lot of people don’t realize that EVs can function like conventional vehicles—they seem to view them more like golf carts. It also seems like many people think waiting 30 minutes for a charge would be unbearable. But when some of those people have traveled with me in my Bolt, they’ve been surprised at how fast 30 minutes passes. Another thing people often bring up is the fear that an EV will “freeze up” like smartphones and computers sometimes do due to software issues. I have not had any issues of “freezing up” that cause my Bolt to be non-functional.

The furthest trips I have done so far are regular trips to visit my family, which is about 220 miles round trip (mainly freeway driving). In warm weather, I can do the trip on a single full charge with a few miles to spare. In cold weather, I do a single 30 minute quick charge session just to be safe, but I usually end up with plenty of charge remaining.

A couple of years ago while at a charging station in Vacaville with my Nissan Leaf a man and his kids walked up to me and asked what I was doing with my car. I told him I was charging it. He got really excited and exclaimed, “What?! You’re charging it?! It runs on electricity, no gas?! I didn’t know they could do that! That’s so cool!” The look on his face was priceless.

Prices need to come down. I noticed a significant number of new Nissan Leafs on local roads and around town when visiting my family once the 2017 Nissan Leafs were discounted in advance of the release of the longer-range 2018 Nissan Leaf.

Also, if there was a way to make people aware of how much driving they actually do on a daily basis. I think many people would realize that they could easily manage with the 200+ mile range on newer EVs (and maybe even shorter-range EVs) or that they could even reduce some of their daily mileage with a bit more planning.