By Lew Fulton and Dan Sperling

The path to zero-carbon transportation may be cheaper than you think. It need not cost trillions nor even billions. And it could even be “free” to taxpayers.

Electric and fuel cell vehicles are the primary strategy for achieving near zero-carbon transportation. But these zero-emissions vehicles (ZEVs) will cost more than gasoline and diesel vehicles for a number of years, and also require extra costs for building charging and hydrogen stations. Eventually these vehicles will be cost competitive, but until then who pays for these additional costs: companies, consumers, or taxpayers?

Over the last few years, research teams at UC Davis—and others around the world—have modeled the costs of transitioning to a zero-carbon transportation system by 2050. While some studies project significant and at times prohibitive costs, our studies show that the overall costs are small. In fact, depending on circumstances (price of oil, cost of maintenance, etc.) and speed of innovation, this transition may cost taxpayers and consumers very little. How is this possible? The primary reason is that technology has advanced faster and costs have declined more rapidly than expected. For example, in 2010, battery costs were around $1,000/kWh, and as recently as 2014 the International Energy Agency used $500/kWh to project future battery costs. Now, battery costs are projected to drop to $100/kWh by 2025 or sooner. As time goes on, estimates of future cost tend to decline due to faster-than-expected technology innovations, faster learning, and scale economies. It is quite possible that with additional advances, costs could dip well below the $100/kWh mark.

Our own work reflects this trend. In 2016, we published a paper that estimated the additional cost for achieving high shares of zero emission light-duty vehicles—beyond the cost of owning and operating gasoline vehicles. In the United States, that additional cost, between 2020 and 2032, would be about $250 billion above a business-as-usual scenario (one without many ZEVs). Since California accounts for about 10% of the country’s population and travel, this translates to roughly a $25 billion transition cost for the state. After 2032, in that analysis, there would be no additional costs, since the cost of owning and operating electric vehicles would be about the same as conventional gasoline vehicles.

In 2019, our group published a paper that expanded the analysis from just light-duty vehicles to also include buses and trucks for California. We found that the additional costs would fall to zero beginning in 2030, two years earlier than previously expected. The total transition cost from 2020 through 2030 also decreased for California, from $25 to $14 billion. Our latest update of this analysis (conducted earlier this year and as yet unpublished) projects even lower transition costs—just $7 billion between 2020 and 2028, hitting zero another two years earlier. So, a 2016 estimate of an additional $25 billion for electrifying just light-duty vehicles in California fell to $14 billion for all cars, trucks, and buses in 2019, and is now projected to be only $7 billion. Equally important, after 2030, the costs of owning and operating ZEVs are projected to be lower than gasoline and diesel cars and trucks. The savings, from 2030 to 2045 could reach $100 billion. Note that all of these estimates were for an 80% reduction in CO2 from transportation by 2050; for a 100% CO2 reduction scenario, things will have to happen faster, and costs through 2030 could be significantly higher. We are investigating that question in our current work.­ 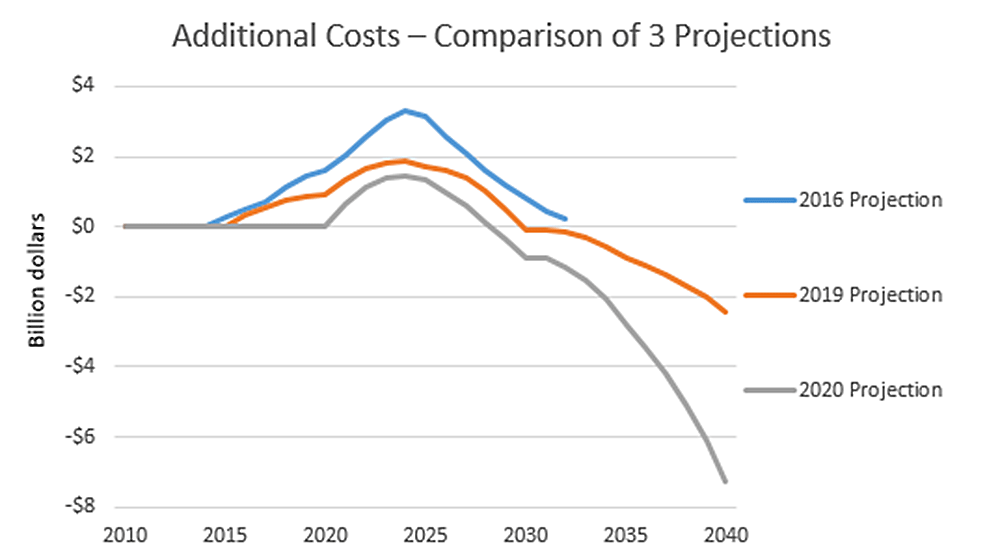 Additional cost of replacing gasoline and diesel cars, buses, and trucks with battery and fuel cell electric vehicles, as estimated in 2016, 2019, and 2020. Incremental costs include vehicle purchase and fuel. (The 2016 study includes only light duty vehicles; the 2019 and 2020 studies include light duty vehicles, trucks, and buses.)

These downward revised estimates are mostly due to steady reductions in the estimated cost of battery and fuel cell vehicles. These cost reductions are likely to be even greater, since we did not include the lower vehicle maintenance costs for ZEVs. Our future studies will incorporate maintenance costs.

These additional costs, even if now projected to be lower than before, may still seem significant. But in terms of overall spending on vehicles and fuels, they are not. The $7 billion incremental costs we currently estimate between 2020 and 2030 for California are less than 1% of the costs residents of the state will otherwise be paying over those 10 years for gasoline and diesel vehicles and fuels.

This $7 billion cost (roughly $70 billion for the US) need not fall on the back of taxpayers. The cost could be shouldered by those buying legacy gasoline and diesel vehicles—with either a tax or a feebate style program where buyers of new gas guzzlers pay a fee, and buyers of ZEVs get a rebate (as already exists in several European countries). Some cost could also be borne by those oil and automotive companies that lag in making investments, for instance if the government  imposes aggressive greenhouse gas performance standards on fuels and vehicles and allows those companies exceeding the standards to sell the credits to those that lag. Indeed, this is already the practice with national CAFE-style standards, and with ZEV sales requirements and low carbon fuel standards in California. Through these mechanisms, some car companies are subsidizing Tesla, and oil companies are subsidizing clean electricity.

These cost estimates and forecasts of electric vehicles might seem optimistic. But they apparently are not for Wall Street investors. Tesla is now more highly valued than Toyota, GM, Ford, and FiatChrysler combined, despite losing money and selling only about 1/50th as many vehicles. And Nikola, a new company hoping to sell fuel cell and battery electric trucks—is now valued greater than General Motors and Ford. It looks like an electric future is in our future—at little cost to society and perhaps none to taxpayers.

Lew Fulton is Director of the Sustainable Freight Research Center and the Energy Futures Research Program at ITS-Davis. He helps lead a range of research activities around new vehicle technologies and new fuels, and how these can gain rapid acceptance in the market.

Dan Sperling is Founding Director of the UC Davis Institute of Transportation Studies, the world’s leading university center on sustainable transportation. He also serves on the California Air Resources Board, overseeing policies and regulations on climate change, low carbon fuels and vehicles, and sustainable cities.