The Low Carbon Fuel Standard (LCFS) was adopted in California in 2009 to contribute to state greenhouse gas (GHG) emission reduction goals under the Global Warming Solutions Act of 2006 (AB 32). Designed as a performance-based regulation, the program incentivizes adoption of low-carbon transportation fuels based on the fuel’s lifecycle GHG emissions per unit of energy—or carbon intensity (CI) as rated by the program. The regulation initially laid out annually declining CI benchmarks for the average transportation fuel mix from 2011 through 2020. In September 2018, CARB adopted regulatory amendments to extend the LCFS for an additional ten years with a target of 20% CI reduction from 2010 levels by 2030. 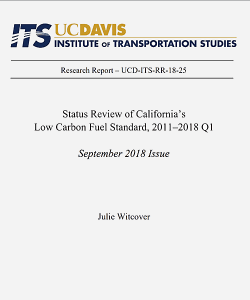