In 2010, China’s 18 million vehicle sales far surpassed U.S. light-duty vehicle sales of 12 million, making China the world’s largest new car market. From 2003 through 2010, China’s vehicle population grew at an annual rate of 18.6%, far faster than even the most ambitious projection. Was this growth in China’s vehicle population an anomaly? Or is something wrong with the projections? And what do these trends portend for the future?

The UC Davis team thinks China’s vehicle population is just as likely to grow 13% to 17% per year. 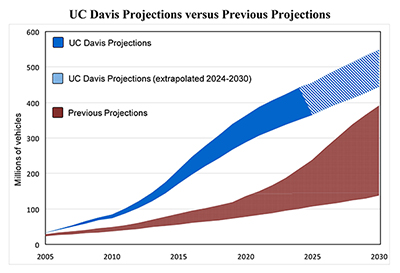 The implications are as alarming as the numbers. “It’s shattering the world view of China,” Sperling says. “It’s very possible that there will be many more vehicles consuming much more oil and emitting much more CO2 than is projected by the world’s leading energy agencies. And that means global oil security and climate change challenges are even more daunting, more problematic than anyone has assumed.”

In addition to taking the top spot in the world vehicle market, China now has the dubious distinction as the world’s largest CO2 emitter and second-largest oil importer, Sperling notes. It’s important to get projections right because forecasts are the foundation for all global studies about the future of oil and greenhouse gases.

“We hope we’re wrong. But in the spirit of scientific investigation, it’s important to appreciate the possibility.”

A second important difference between the UC Davis researchers’ findings and previous projections involves the choice of benchmark countries. The UC Davis team examined historical experiences in seven large vehicle-producing countries: Japan, United States, Italy, Spain, Germany, South Korea, and Brazil. Previous studies built forecasting models on large datasets that included from 45 to 122 countries, many of which are tiny or do not have their own automotive industry. Countries with large auto industries tend to support the development of their industry and thus experience much higher vehicle growth than other countries.

Wang asks, “China is not at all similar to Singapore. Why include data from this comparison?” Adds Sperling: “This paper challenges the conventional view of vehicle population growth. It says, if you look at the experience in other auto-producing countries, there is plenty of reason to think that vehicle growth could continue at current rates approaching 18%.”

A third important distinction is the timeframe of the projections. Most previous forecasts relied on World Bank or International Monetary Fund data that only go back to the 1960s. Thus, projections ignored the 1950s when motorization was especially rapid in many large vehicle-producing countries, Wang says. By choosing fewer benchmark countries and those from which they could also obtain data from the 1950s and before, the UC Davis team captured experiences that are analogous to China’s current market experience.

While Wang is confident the team’s assumptions are reasonable and based on solid data, he admits there’s always uncertainty in making longer-term projections. Sperling and Wang say the study has helped strengthen the relationships between the ITS-Davis China Center and its research and government colleagues in China.

Wang sees the center playing a role in China’s efforts to develop more sustainable transportation systems. The UC Davis team also has benefited from an interesting scientific study. “Because China is changing so fast, it’s a living laboratory. Plus, it’s central to international policy on climate and energy security,” says Sperling. “This work points to the importance of understanding in an empirical way how change happens – instead of just crunching numbers. It’s an elegant approach that is emblematic of the Institute’s way, where researchers conduct cutting-edge analysis with a sophisticated understanding of real-world data.”