The University of California, Davis has been undertaking technical and modeling research on the subjects of hydrogen and fuel cell vehicles for over 20 years, including early studies by Dan Sperling and Mark Delucchi. Work increased considerably when Joan Ogden arrived and started the Hydrogen Pathways Program in 2003, a sponsor-funded consortium which engaged 6-8 lead Ph.D. researchers and 10-15 graduate students and Post-Docs from UCD. This eventually broadened to become the Sustainable Transportation Energy Pathways (STEPS) program in 2007, but has always retained considerable focus on hydrogen and fuel cell vehicles over the course of this program up to the present day.

Most of the hydrogen research at UC Davis focuses on technical assessment and system-level modeling, though Davis has maintained a battery research lab over the past 2 decades, run by Dr. Andrew Burke. UC Davis operated one the earliest hydrogen refueling stations in California (2004-2009), supplying serving vehicles run on hydrogen and natural gas/hydrogen blends. 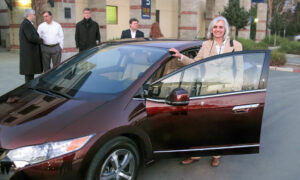 Systems modeling projects have been led by Dr. Ogden through 2018, when she retired (though she stays involved in some research projects). Ogden’s group undertook studies of technology and cost assessment, system design, and transition costs, with major contributions by Dr. Chris Yang, Prof. Yueyue Fan, Dr. Andy Burke and a large cohort of graduate students and Post-Docs.  This work is notable for its innovation in considering how to grow the number of hydrogen fuel cell stations and where to place them, to optimize their value to FCEV drivers.  She has also done seminal technoeconomic assessments on low carbon hydrogen production (renewables and fossil with CCS), pipelines, electrolyzers, “tri-gen” systems, natural gas/hydrogen blending, hydrogen storage options and hydrogen transition costs. Ogden served on a 2008 National Academies Committee assessing the “Hydrogen Economy” including  modeling contributions from Dr. Chris Yang and Dr. Marc Melaina. Ogden also served on the USDOE Hydrogen Technical Advisory Committee (2009-2017).

UC Davis is currently undertaking a range of research on hydrogen systems under the umbrella of the “California Hydrogen Systems Analysis” Study, led by Lew Fulton.  This study includes:

STIEVE modeling of fuel cell vehicles in California, developed by UCD researchers. This model has been developed by UC Davis researchers (led by Alan Jenn and Tri-Dev Acharya) over the past 2 years, It provides a detailed spatial representation of fuel cell light-duty and medium/heavy-duty vehicles around California, their potential growth (with scenarios through 2050), travel patterns, refueling requirements, and need for refueling stations.  The model then provides an optimized growth projection for the numbers, sizes, and locations of stations for cars. The model is currently used to provide spatialized hydrogen demands to 2030 and beyond for different scenarios, fed into our hydrogen systems models.

The SERA model, being developed under license from, and in cooperation with NREL is a hydrogen supply chain model that can be used to spatially estimate the optimal siting of hydrogen production (of any kind) relative to the locations and quantities of demands it faces. It provides a scale up analysis of all needed infrastructure (production/ storage/transportation to final end users or fuel stations).  UC Davis has been integral in operationalizing “SERA 2.0” and is now using this version to create scenarios of hydrogen production/distribution to refueling stations, with demand profiles provided by our STIEVE model.

Led by Alan Jenn, the development of the GOOD electricity model has now incorporated a strong representation of the Western US electric system (WECC) and the possibility of using hydrogen as a storage medium during the year, considering demand profiles at 10 minute intervals, projected to 2050.  Very high renewable scenarios have been developed in the context of meeting future electricity and possible end-use hydrogen demands, along with using hydrogen within the system.

During 2021 and 2022, the three models have been configured to be run in tandem for similar scenarios, to investigate the nature of a fairly rapid increase in hydrogen demand in California for stations, supply needs, electric sector impacts, and hydrogen transportation/storage infrastructure. Results from these modeling efforts were released publicly in May 2022.

Other related efforts include detailed assessments of light-duty and medium/heavy duty fuel cell vehicles and hydrogen station operations, led by Andrew Burke, and potential hydrogen demands from industry and other stationary sources being led by Kelly Kissock.

Policy Brief: Hydrogen Can Have a Much Lower Carbon Intensity than Fossil Fuels But This Largely Depends on How It Is Produced and Distributed (Timothy Lipman, Arpad Horvath, and Stephanie Collins – UC Berkeley; and Allisa Kendall, Lewis Fulton, Pablo Busch – UC Davis)

Use Of Liquid Hydrogen in Heavy-Duty Vehicle Applications: Station And Vehicle Technology and Cost Considerations (Andrew Burke and Lew Fulton)

Sep 22, 2022: UC ITS webinar: California’s Hydrogen Strategy – Where Do We Go From Here? | Webinar recording

Sample of Past Projects

Design of Hydrogen Station Networks: How Many Stations are Needed? Where should they be sited?

Ogden and C. Yang, “Build-up of a hydrogen infrastructure in the US,” Chapter 15, in The Hydrogen Economy: Opportunities and Challenges, edited by Dr Michael Ball and Dr Martin Wietschel, Cambridge University Press, 2009, pp.454-482.