‘Bicycling While Black’: The Problems of Policing and Planning 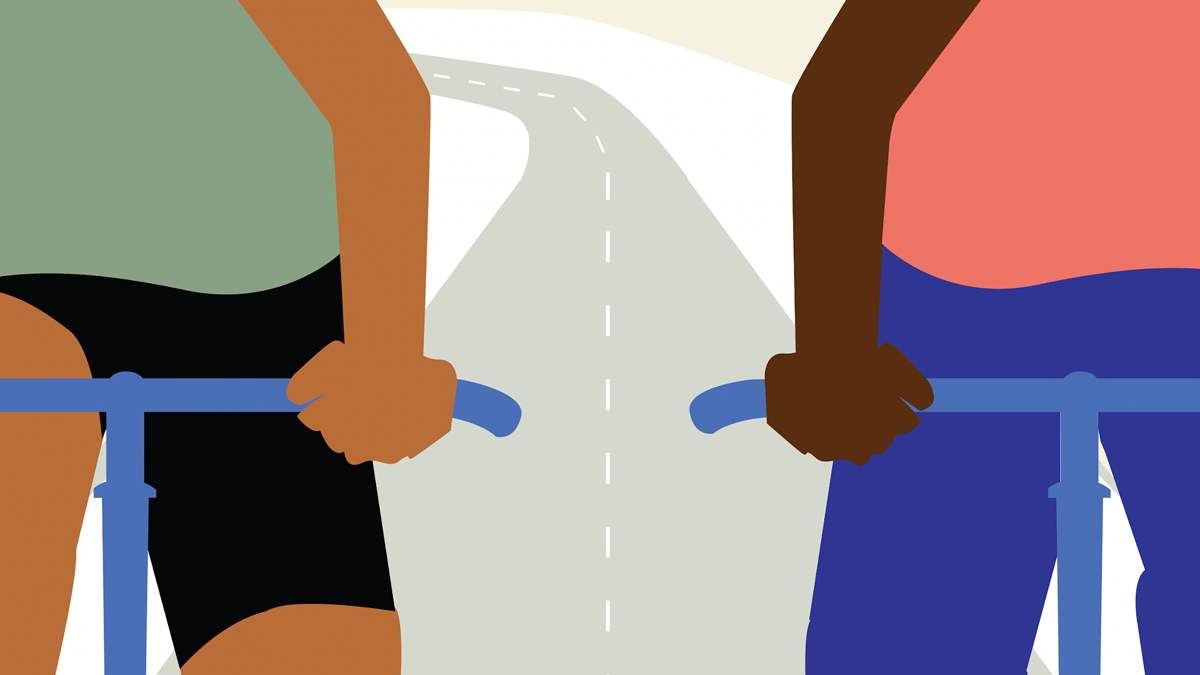 Last week, community members took to the streets yet again to protest two fatal shootings of Black people at the hands of the police, one of which occurred right here in California. On August 31, 2020, Los Angeles County sheriff’s deputies shot and killed Dijon Kizzee in South Los Angeles. The details of the incident are still emerging as of this writing, but the encounter began as deputies tried to stop Kizzee for an unspecified vehicle code violation as he was riding his bike.

Traffic stops are the most common form of interaction between the police and the public. Cases of “driving while Black,” in which Black drivers are disproportionately stopped, are well documented. But the evidence points to cases of “bicycling while Black” too. In New York City, Black and Latino cyclists were given 86 percent of the tickets for riding on the sidewalk in 2018 and 2019, but made up just about half of all cyclists. Those data follow a 2014 report that showed 12 of the top 15 NYC neighborhoods for bicycle tickets were in majority Black or Latino neighborhoods. In Tampa, Fla., eight out of every ten bicycle tickets were issued to Black cyclists between 2012 and 2015. And in Chicago, a city where I have done work recently, bicycle tickets have been issued twice as often in majority Black neighborhoods compared to majority Latino or white neighborhoods since 2008.

The Chicago case offers further insights about how planning intersects with policing. I have done some preliminary analysis examining whether infrastructure availability plays a role in the patterns of bicycle tickets issued in the city, on top of the racial disparities others have identified. About 90 percent of all bicycle tickets issued in Chicago are for riding on the sidewalk. I found that these tickets are more likely to be issued along streets with higher traffic volumes that lack bike infrastructure. Both traffic volume and the overall absence of bike infrastructure tend to be correlated with neighborhoods where there are higher shares of people of color. This tells us that deliberate attention to racial justice principles in bicycle infrastructure design and implementation could prevent other needless deaths.

Each day, bicycling is celebrated as an economically and environmentally sustainable means of transportation, and as a way to stay fit and healthy—even more so during the COVID-19 pandemic. Anyone can do it, bicycle planners and enthusiasts argue, especially if there is high quality, safe infrastructure and nearby places to get to with convenient and secure places to park. But this hopeful vision is not always realized, as prominent Black scholars, transportation practitioners, and advocates have vociferously called out of late because of the recent killings. They point out that Black bodies in public space—no matter the mode of transportation—are always at risk and will continue to be until we address the root causes of that risk. In so many cases, that comes down to racist policing practices. And further still, transportation planning is complicit in those disparities and inequities.

These issues call for a careful review of not only unjust policing practices but also the racist effects of transportation planning, whether or not they are intentional. Vision Zero, the traffic safety strategy designed to eliminate preventable traffic deaths, offers an example of how to move in the right direction. The strategy is rooted in a framework that says crashes can be reduced through better engineering, education, and enforcement. But even these strategies need to be reviewed and modified as new information becomes available. In light of renewed calls for racial justice this summer, the Vision Zero Network is stepping away from highlighting traffic enforcement as a pillar of safety, replacing it instead with guidance for anti-racist policies and processes. Advocates have been sounding this message for some time, and in some places those with the power to make policy changes are starting to come around.

These issues also call for scholars to revisit what it means to research and teach about bicycles. The emerging field of mobility justice urges us to think about how identity plays a central role in how people move around, and how marginalized groups are often denied the freedom of movement that others enjoy. Incorporating a mobility justice lens in research could push scholars to examine whether their work considers these intersections of transportation and identity, and if it doesn’t, then why not. In order to encourage other transportation researchers to engage with these weighty issues in the classroom, my colleagues and I have created a constantly-updated reading list as a resource that faculty can use to address and amplify questions of equity and justice in their teaching. The list highlights Black, Indigenous, or People of Color authors who have been giving voice to these issues for quite some time.

Although important and necessary, examining and changing transportation research practices within academia won’t be sufficient to prevent more deaths of Black cyclists. It will require hard work within all of the institutions that enable such violence today. Tamika Butler, a leading voice for racial justice in the transportation world, put it best: “Bicycling cannot solve systemic racism in the United States. But systemic racism can’t be fixed without tackling it within bicycling.” I hope that we can all be part of that solution.

—
Jesus M. Barajas is Assistant Professor in the Department of Environmental Science and Policy at the University of California, Davis. He teaches courses on environmental justice and his research focuses on transportation equity.