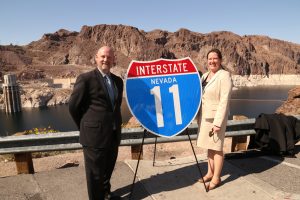 As the Assistant Director for Planning for the Nevada Department of Transportation (NDOT), Sondra Rosenberg, M.S., Transportation Technology and Policy (TTP), 2005, is making a difference and playing a significant role in the public sphere.

Rosenberg has been managing and actively participating in transportation and research projects with NDOT since 2008. She coordinated the multi-state Interstate-15 mobility alliance, and played a major role in the development of Interstate 11. With her promotion to the Assistant Director position in September 2014, Rosenberg supervises several departmental divisions, including Multimodal Planning and Program Development, Transportation Data, Traffic Safety and Performance Analysis. She is also in charge of coordinating project funding, grant opportunities and represents NDOT on national committees and conferences.

“One of the big things that I participated in this week was the MPO (Metropolitan Planning Organization) certification review. Every four years, the Federal Highway Administration and Federal Transit Administration review MPOs to ensure they are meeting federal requirements and guidelines. I was there to represent NDOT as a major partner agency,” Rosenberg said. “It’s rewarding to me because the last time they had a review, they found some things that needed fixing. This time they had a few suggestions, but they found no problems, basically saying ‘MPO and NDOT, you’re doing a great job.’”

Prior to landing at her current public agency, Rosenberg explored a lot of alternative career options. After finishing her degree in physics, Rosenberg decided that she preferred work that had a more direct connection to people’s lives. She intended to study energy policy when she enrolled at the UC Davis Institute of Transportation Studies (ITS-Davis) but soon discovered her passion in transportation policy.

“I thought I could start [at ITS-Davis] and then go to Berkeley’s Energy and Resources Group, but once I got to Davis and learned how transportation affected my life, it got more and more exciting to me. There’s that relatability to what I do and how it affects people’s lives, and the more I learned, the more I got interested in transportation, shaping policies, and having conversations about how it affects our daily lives.”

ITS-Davis’ unique transportation research program puts dual focus on policy and engineering, which Rosenberg found a bit challenging to explain when she first started applying to jobs after finishing her degree. 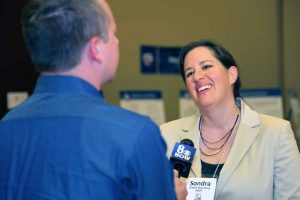 “It’s hard to translate, but the benefit is that the combination of exposure to engineering as well as planning and policy aspects is very useful and a lot of government agencies understand that,” Rosenberg said. “Davis really prepared me for the policy and funding part. That connection to the state government is strong at UC Davis and I think you just don’t get that anywhere else.”

After receiving her master’s degree, Rosenberg worked from 2004 to 2008 at Fehr and Peers, a firm that provides transportation and planning services to public and private sector clients. She then served as a National Parks Transportation scholar, before joining NDOT.

Rosenberg still keeps in contact with peers and faculty from ITS-Davis, and finds herself constantly bumping into colleagues at meetings in Washington D.C. or at conferences all over the country. In addition, Rosenberg has recently reached out to ITS-faculty members Dan Sperling and Susan Handy to recruit students into vacant positions at NDOT. ITS-Davis students are a great fit, she adds.

Rosenberg’s experience at ITS-Davis, coupled with her competence and determination, enabled her to be promoted to her current position at NDOT much sooner than she had expected.

“There are very few places in the country that offer the program that UC Davis does and it’s so important for what we do in transportation, so I feel very fortunate that I went there and landed a job in transportation and was able to use the skills I learned.”

The #AggiesAtWork series is done in partnership with the UC Davis Cal Aggie Alumni Association.
View other AggiesAtWork stories: